Like many organizations committed to basic principles of social justice, CUPE 3903 is extremely disappointed to learn of the recent suspension by the York administration of the activities of the York University Advisory Committee on Responsible Investment (YUACRI) (see the open letter from YUACRI members). This unilateral, top-down, and heavy-handed decision comes as a response to the duly-constituted Committee’s recent majority decisions to recommend divestment from companies involved in arms manufacturing and fossil fuel industries. It seems more than obvious that investments in industries that directly contribute to violence and the death of human beings, and to ecological destruction, wholly contradict our shared values and York’s social justice mandate, clearly outlined in the university’s mission statement.

Rather than seizing this opportunity to position itself as a progressive leader taking a bold stance on issues of global concern, the York administration has unilaterally suspended its own Advisory Committee for doing what it was ostensibly designed to do – provide advice, based on community feedback, on how to invest York’s endowment fund responsibly. This unprofessional decision does not demonstrate the kind of leadership that takes principles of collegial governance seriously. As CUPE 3903 is well aware, the current administrative practice of “consultation” with the York community is far too frequently an empty public relations exercise.

CUPE 3903 adds its voice to the many other organizations and individuals at York calling for the immediate reinstatement of YUACRI, so that it can continue its invaluable work. 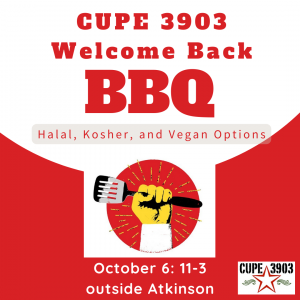 Join us for the CUPE 3903 Welcome Back BBQ October 6th between 11-3, outside Atkinson building! Come meet or reconnect with other members, talk about what’s going on in the union, and — of course — have some food! There … Continue reading →
View Calendar
Add

Get Active In Your Union!